Before I get into the details of the Proposed FY 18 School Budget, I wanted to take just a minute to "brag" a bit about the Gorham Schools so that people might gain a better understanding of the quality of service that is purchased with their very valuable tax dollars.

Gorham High School has just been ranked one of the top ten high schools in the entire state of Maine by US News & World Report.  This is an improvement from our #14 ranking of just 1 year ago.  Last year, 96% of our graduating seniors went on to post secondary learning experiences.  We also added 33 new colleges to our "Future Story" wall at GHS this past summer (if you don't know what that is, check out the Maine lobby when you go to a ball game next time. . . its a listing of every college our graduating seniors have attended over the past several years!  Impressive!).  GHS students participate in 45+ exciting co-curricular activities like robotics, musicals, chorus, band, rainbow league, and many more.  Our students have consistently won awards in these areas such as Odyssey of the Mind, robotics, and our music and theater  programs.  Additionally, our students participate in many extra curricular activities successfully with both boys and girls soccer teams being Southern Maine regional champions in class A last fall, and our girls B-ball team winning their second Class AA state championship in a row this past winter as just a few examples of our student's athletic success.

Our students also work hard to support our community by giving blood, by helping to stock the local food pantry, by mentoring younger students, by donating art work to the empty bowls project each year and much more.  Additionally, our students are well supported by our community with 3,000 plus volunteer hours being provided by our community members, by countless internships and job shadowing experiences, and by participation in other large events such as our annual K-5 STEAM nights.  Clearly, we have great students, we have great schools, and we live and serve a great community here in Gorham!

This year's FY 18 budget development process has been a long and challenging one.  We started our work back in November of 2016 by asking staff to identify what they needed to run their programs for the coming year and by discussing priorities with district leadership and School Committee.  In December, building and program level budgets were due to my office and we began to put a first draft budget together.  In January, individual meetings were held with each building principal and program director where each budget line was reviewed and questioned thoroughly. Then in February, a first draft budget was created and shared with the School Committee during its first budget workshop meeting on Feb. 13, 2017.  Then the School Committee continued to meet over the course of 6 more grueling budget workshop meetings where priorities were solidified, and rationale provided for each request.  On April 12, 2017 the School Committee then voted unanimously to support the proposed FY 18 budget and to send it along to the Town Council, which is where we are in the process at this point.

There are just three steps left in the process at this point.  First is a joint meeting between the School Committee and the Town Council scheduled for May 16th, 2017 at 6:30 p.m. in council chambers.  During this meeting, the School Committee will present the proposed budget to the Town Council and be prepared to answer any questions they may have.  The second is the public hearing and Town Council vote on the Town's budget which is scheduled to take place on June 6th, 2017 at 6:30 p.m.  During this meeting the Town Council will vote on the total town's budget.  The Town Council can increase or decrease the total school's proposed budget, but they cannot dictate how those changes might play out for the school department.  The third step is the public validation referendum that is scheduled for June 13th, 2017.  This is a public referendum vote.  Voters are asked to either approve or deny the overall school's budget.  If the budget is approved and validated, it is good to move forward.  If the budget is approved but not validated, the process must be repeated until it is.

Almost 80% of our total school budget costs are in staffing.  This makes sense because we are primarily a people oriented organization.  Each year it costs us more to simply maintain the status quo.  For this coming year, we must honor negotiated salary increases as follows:

These increases total about $750,000.00 in impacts to the proposed FY 18 budget.  Again, this doesn't change our existing staffing, it just maintains it.

In addition to these costs, this year our premiums for health insurance costs went up by 9.18%.  The impact to the proposed budget due to this change (which we can't control) was an increase of $73,000.00

Finally, MPERS (Teacher Retirement) costs are going up from 3.36% to 3.96% (which again we can't control).  The impact to the proposed budget due to this change was an increase of $120,000.00.  The interesting thing to note regarding MPERS costs is that prior to 2014, these costs were never in the local school's budget.  Instead, these costs were paid for entirely by the State of Maine.  A statute was passed in 2014 that moved MPERS costs into the EPS funding formula and began to require that local school systems pay a portion of their costs.  Since 2014 over $1 million has been paid by Gorham property taxpayers over the course of five years that, prior to 2014, were paid for entirely by the State of Maine.  Just one example of the state passing more costs onto local property tax payers.

The State of Maine Department of Education establishes a recommended reinvestment for annual capital planning of school facilities at 2% of the total estimated replacement costs for each building.  Gorham has never met this mark, and in fact has been very far from it.  Here is a chart showing what we should be investing annually in our schools for capital improvements:

In last year's contract negotiations with teachers, the Gorham School Committee approved a plan that would allow elementary teachers to have, on average, 225 minutes per week for planning time.  This time would allow K-5 teachers to have a more equitable amount of time per day to plan for the important work they do with children.

In order to create this planning time, we had to add an additional allied arts rotation for students and bring existing part time allied arts positions (that were at .6) to full time.  Through our work to create this proposed budget, the School Committee has approved adding classroom guidance instruction for grades K-2 and STEM focused technology instruction (such as coding) for students in grades 3-5.  This change would require us to hire 1 more elementary guidance position, 1 Ed. Tech. III and bring existing .6 allied arts positions up to full time.  The projected impact to the proposed budget is estimated at an increase of $217,000.00.

Below is a chart summarizing our total K-12 enrollments since 2001 and giving us a glimpse into our projections through 2020: 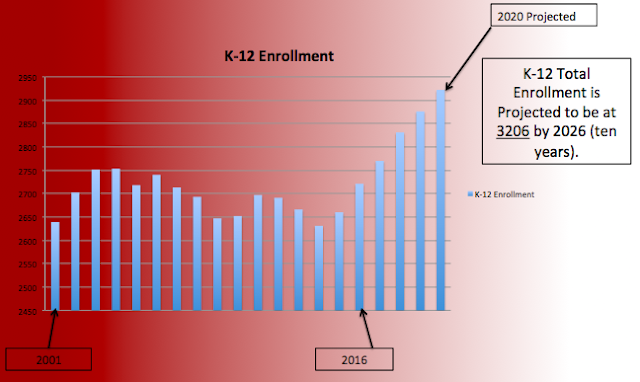 As you can see, we reached a high of approximately 2750 students in 2004 and then had a period decreasing enrollments, hitting a "low" of approximately 2625 in 2014.  Since then, however we have been steadily increasing in our overall enrollments, especially at the K-5 level, and we are projected to continue.

These projections are supported by a ten year history of single family home permits that has recently been completed by the Town of Gorham.  That history is seen below:

Our overall enrollment is projected to increase by 400 students across grades K-12 in just ten short years as can be seen below: 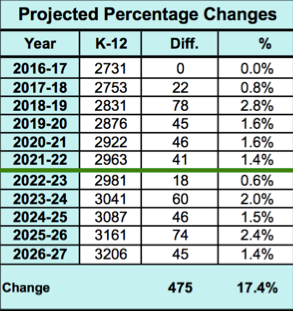 The most immediate results of which is currently being felt at the K-5 levels.  These increasing enrollments are also increasing pressures on our K-5 schools that currently feed from 3 attendance zones.

Due to these increasing enrollments, we have had to add four additional teaching positions for the proposed FY 18 budget, as well as an additional 2 regular Ed. Techs for a total increase to the proposed budget of $420,000.00.

So now that you have a solid understanding of the four key cost drivers behind this year's proposed FY 18 budget, let's share the overall impacts of the proposed Budget.  The proposed FY 18 budget totals $37,921,593.00 and represents a 4.49% increase over the final approved FY 17 budget of $36,291,178.00.  This budget requires a 8.5% increase in the local appropriation.  Assuming General Purpose Aid is finalized at the proposed level, and the actual FY 17 property tax increases by $10 million in FY 18, the impact of this budget on the mil rate is an increase of 7.72% or $0.85.  In review of the FY 18 budget summary page in the budget booklet (Click Here for a link), you will see an increase in the local appropriation of $1,469,265.00.

If you are interested in learning more about the Proposed FY 18 School Budget, I would invite you to go to our district website to watch a series of budget informational videos that are posted there.  I have inserted that LINK HERE for your convenience.  I would also encourage you to reach out to me with any questions you might have.  You can call my office at 222-1012 or you can email me at heather.perry@gorhamschools.org.